Thought Of The Day – Who Created The Sphinx?

1a capitalized : a winged female monster in Greek mythology having a woman’s head and a lion’s body and noted for killing anyone unable to answer its riddle
b : an enigmatic or mysterious person she is a sphinx whose features hold a blank fascination
2 : an ancient Egyptian image in the form of a recumbent lion having a man’s head, a ram’s head, or a hawk’s head

Look for the sphinx in your life! Today!!! 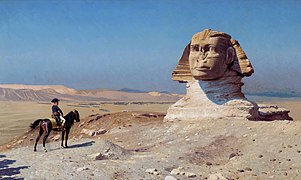 In 1923 Howard Carter opened King Tutankhamun’s tomb.  One paper was given the exclusive rights to cover the story. Across the US a fever was created for pictures and stories about the young Egyptian king’s tomb.

The TIMES of London was the sole proprietor of BW photographs, articles and interviews.  Above is a billboard poster announcing the Times  accomplishment.

The silent film industry presented an exotic ideal of egyptian dress in films,

architecture was influenced by the tombs of Egypt particularly the Rosicrucian society,

Why this reminds me of my one and only chance (please excuse my old buzzard drinking at rundown bar diatribe) to climb the pyramid, I’m sure I’ve mentioned this before but I still, STILL can’t believe that I chickened out on this one…this one being, there was a trip to Egypt -$500 dollars that’s right and it included  RT airfare hotel breakfast for one week with a quick climb up one of the pyramids that included  a personal guide, idiot ,I WAS AN IDIOT, to pass that up – anyway this story was brought to the surface by the mention of the Rosicrucian society, as to the fact being that, while on a road trip with a friend to California, trying to drive straight out – asap – we ran across, while on one of our many midnight caffeine drenched hurtles no lees than Elvis Presley’s first home, a tiny white house with a white fence, the only thing  spotlighted  in town at midnight, then the next night round the same time we hit, purely by happenstance as we had no plan except speed, a temple of the Rosicrucian society with a SPHINX just about my size, I’m 5’9!/2″, me being me at midnight – stopped the red Toyota stick we were driving and I climbed up and perched myself face to face with The SPHINX!!!  Or at least a replica of it, I can still feel the stone of its hat underneath my fingertips as I waited for this moment to be caught on film… these things happen in the wee hours, anyway,

All images from Google

Ode To The Sphinx

Some say you are a minx,

Some say buried under your paws is a missing link?

Do you have the answer to the eternal jinx?

Or did you magically cast a spell that is waiting to gel?

A spell that will turn the world pell-mell,

Tell us your secrets before the clang of the bell.